They did spy on the campaign

So they were spying on the Trump campaign.

The FBI obtained a warrant to secretly surveil former Donald Trump aide Carter Page last summer under the Foreign Intelligence Surveillance Act (FISA), according to a Tuesday Washington Post report.
The FBI and Justice Department demonstrated probable cause that Page is acting on behalf of a foreign state in order to be granted the warrant.
The FISA warrant was part of the FBI’s investigation into possible ties between Russia and Trump campaign associates, law enforcement and U.S. officials told the Post.


In any event, the Obama administration failed to find any evidence that anyone associated with Trump was somehow cooperating with the Russians–not even a “junior member of the [Trump] campaign’s foreign policy advisory group,” as Page described himself. If they had, we would have learned about it long before now.
We haven’t heard the last of this story, but for the moment one thing is clear: a great many people, inside and outside of the media, owe President Trump an apology. Assuming that President Obama knew of, and approved, the FISA application–a safe assumption, I think–Trump’s much-reviled tweet was true:


Obama had my “wires tapped” in Trump Tower just before the victory. Nothing found.


How much of this Trump knew all along is, at this point, unclear.


It would appear President Trump was correct.


Tuesday, April 11, 2017.  Chaos and violence continue, The Mosul Slog continues, Iraq is among the countries with the highest number of executions in 2016, and much more.


Brookings and the Lawfare Institute publish a piece by Paul Salem and Randa Slim which opens:


The United States has played a leading role in fighting the Islamic State, but now it must prepare for the fights that will take place at negotiating tables and reconciliation conferences. Iraqis recognize that the coming months will be difficult. In a recent visit to Iraq, our interlocutors from various political stripes emphasized the enormity of the challenges facing the country after the expected expulsion of the Islamic State from Mosul. If we are not to make the same mistake of winning the war and again losing the peace, the Trump administration should look beyond the focus on the current battle and develop a layered and sustainable strategy to help Iraq move toward stability. While this strategy will include military and aid components, it will need to have a strong political and diplomatic component. War, including civil war, is the continuation of politics by other means. If Iraq does not get its politics in order, the country’s political struggles will continue to play out in other violent ways that Iraqis have come to know too well, and the specter of more sectarian conflict, radicalization, and terrorism will persist.
First, to be sure, a defeat of the Islamic State in Mosul will not be the end of the kinetic battle against the terrorist organization in Iraq. Though 70 percent of Mosul has been liberated, there are still an estimated 400,000 people behind Islamic State lines in the city. A fair number of these are families of Islamic State fighters who came to Mosul from Diyala, Anbar, and Tikrit. While Iraqi forces have retaken major cities, Islamic State fighters are still entrenched in about 40 percent of Kirkuk province, including the districts of Hawija, Riyadh, and Rashad, which lie on the western side of the province. They also control Tal Afar, parts of Sinjar province, and in Anbar they hold the cities of Ana, Rawa, and Qaim, all close to the border with Syria. Even if defeated there, they could head for the less accessible hills and deserts of Diyala and Anbar provinces, and as long as they also have havens across the border in Syria—most prominently in Raqqa and Deir Ezzor—they can always return. Still, their defeat in Mosul will mean the end of their experiment in religious rule in Iraq and a great blow to their prestige and appeal.

The ongoing kinetic threats justify maintaining a medium-term U.S. military presence around current troop levels of 5,000-6,000 personnel to maintain support, training, and cooperation with the Iraqi armed forces. This is what the Iraqi government has requested, and the United States should provide this assistance. Indeed, President Trump has himself said “we shouldn’t have gone in; but certainly we shouldn’t have left.”

So they finally get around to discussing the need for diplomacy and it's used to argue for troops to remain in Iraq?


Iraq does need a diplomatic surge and it's needed one for some time.

And we've made that argument repeatedly for years now.


Welcome to the room, War Hags.

But those of us who've been standing here already for some time are fully aware that you only mention diplomacy now because you're attempting to justify keeping US troops in Iraq.

A diplomatic surge should have taken place in 2014 when the bombings did.

The failure to do so goes a long, long way towards explaining the never-ending mess.

In fact, Barack Obama was insisting, June 19, 2014, that the only answer for Iraq's myriad of crises was a political solution.

But no time was spent on that.

Those of us calling for a diplomatic surge have long noted that reconciliation could have been tied to F-16s or any other weapons that the US has been supplying to Iraq for years now.


Reconciliation, after all, was a White House defined benchmark for success in 2007 that Iraq agreed to.

But it never met that benchmark.

Ten years after agreeing, it still hasn't met it.

Lots of happy talk from Iraqi officials to the press, but still no end in sight.

This operation was supposed to last mere weeks, remember?

Or when CNN's Elise Labott embarrassed herself in a State Dept press briefing by yelling "NO!" when a reporter suggested it was a slog?


But still it continues.

Drone footage taken by the AP in the Dawasa neighborhood of western Mosul on April 5 shows entire streets reduced to rubble, with deep craters dug up by airstrikes. By comparison, eastern Mosul was generally preserved, with damage mainly concentrated on individual buildings and road junctions.
[. . .]
Much of the destruction is wrought by Iraqi and coalition air power. An analysis of bombing in western Mosul between March 8 and 25, conducted by Human Rights Watch and using satellite imagery, identified 780 impact sites that may have been caused by large, air-delivered munitions, resulting in the destruction of hundreds of buildings. The analysis called the destruction comparable in intensity to the Russian-Syrian air attacks on Aleppo in September and October last year.

The brutal fight for Iraq's western Mosul is taking a heavy toll on civilians: cbsn.ws/2oUvZ9Z 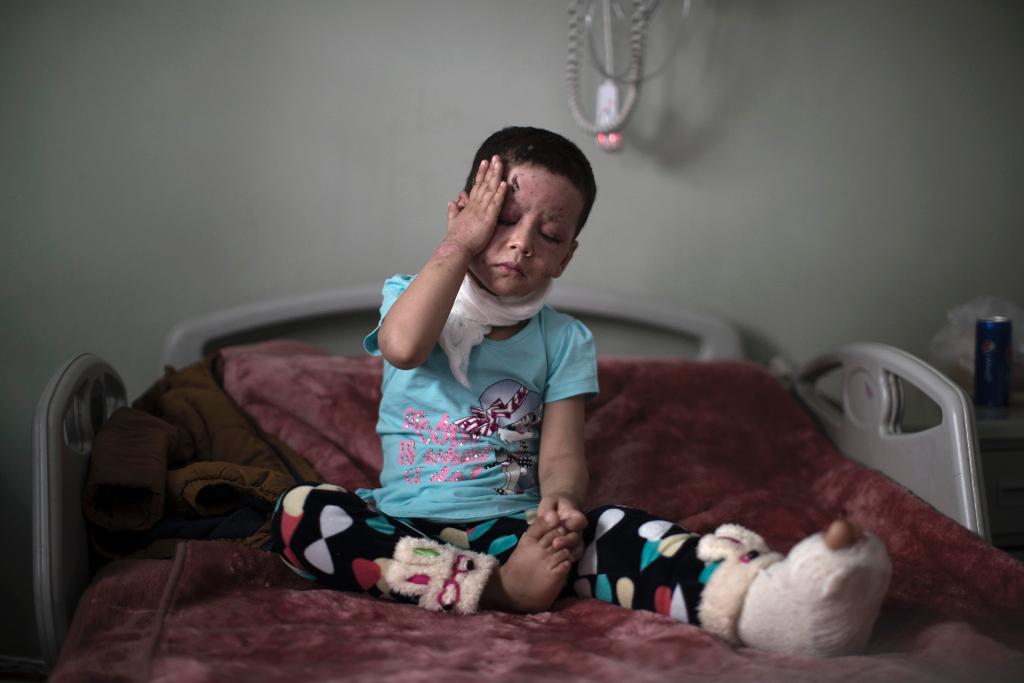 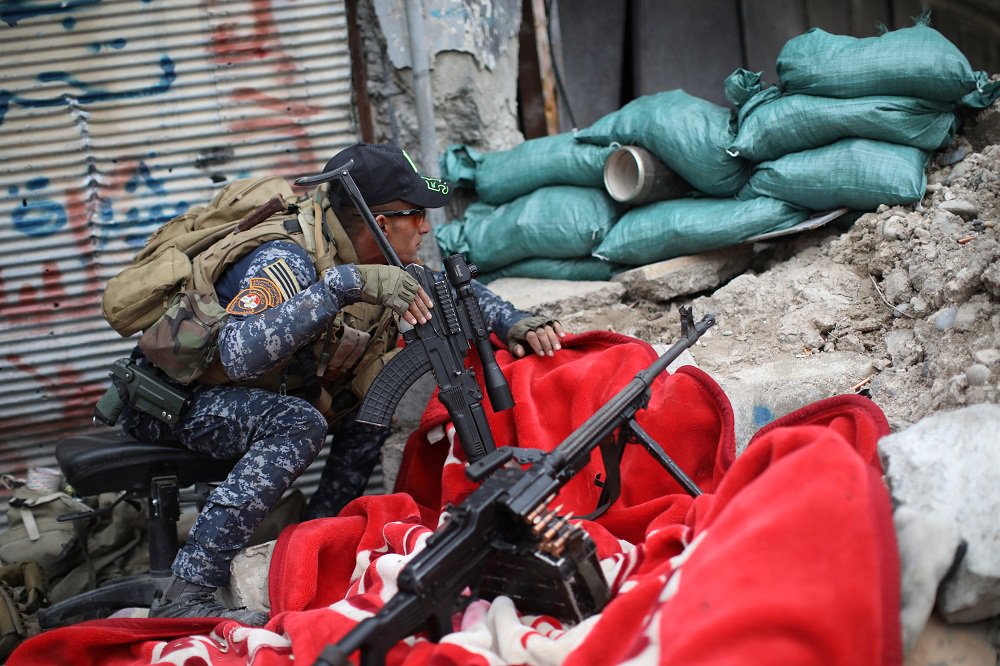 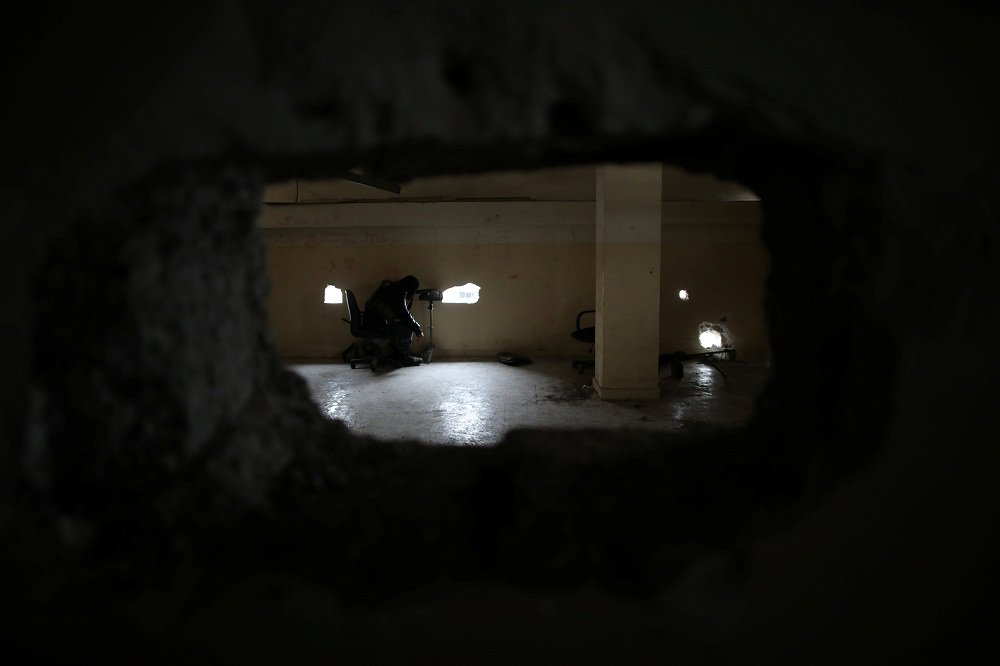 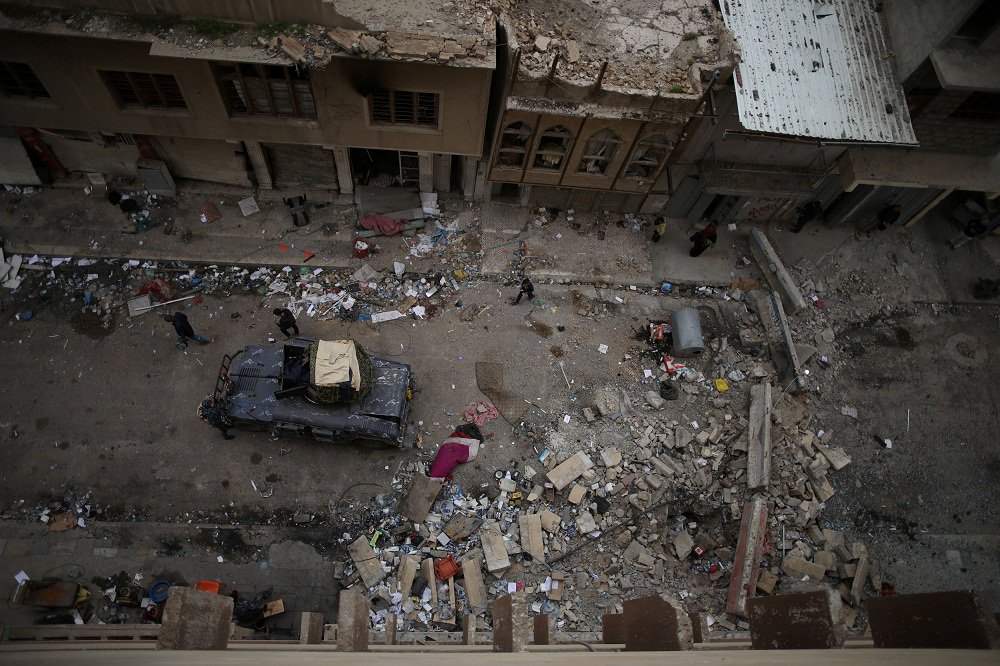 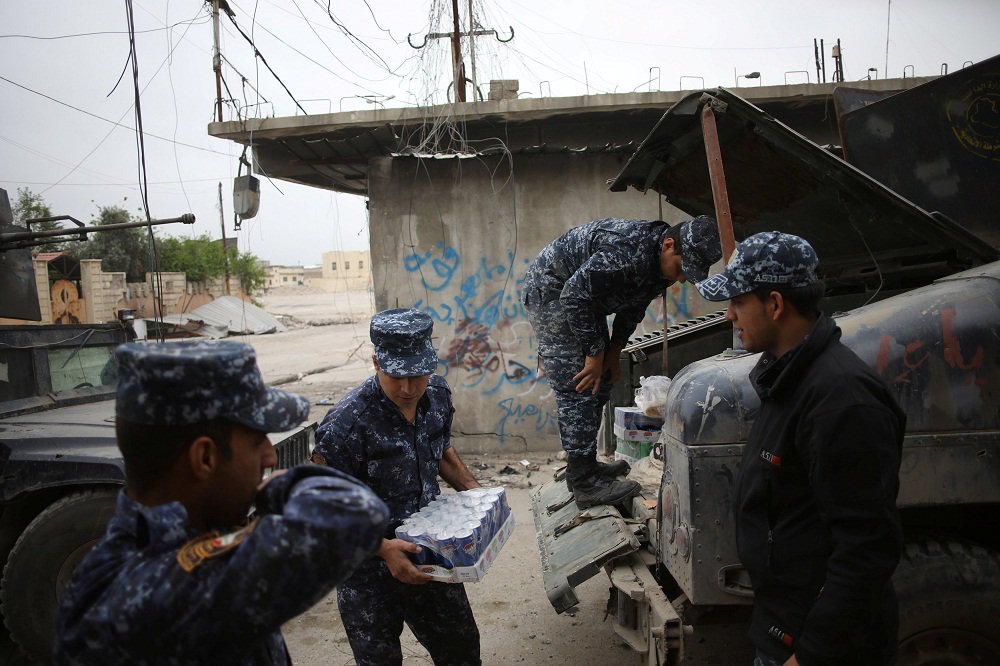 And the militias -- now part of the Iraqi forces, don't forget -- always have time to terrorize civilians.

Turning to the issue of the death penalty, Amnesty International has a new report covering known 2016 executions:


China remained the world’s top executioner – but the true extent of the use of the death penalty in China is unknown as this data is considered a state secret; the global figure of at least 1,032 excludes the thousands of executions believed to have been carried out in China.
Excluding China, 87% of all executions took place in just four countries – Iran, Saudi Arabia, Iraq and Pakistan.

For the first time since 2006, the USA was not one of the five biggest executioners, falling to seventh behind Egypt. The 20 executions in the USA was the lowest in the country since 1991.