No, they are not objective 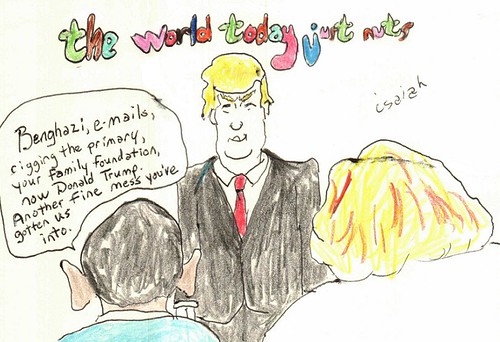 
Do you see any problems?


It will likely turn out to be false -- if anyone investigates it.

But no one has.

To investigate it, you would have to comb through the actual votes from 2016.

So it is "unproven."

That is not used on the charges against Russia.

But there is no proof that Russia 'hacked' (however you define that) the elections.

(We do know Ukraine worked it for Hillary Clinton.)

So, yet again, we see how when pretending to be objective, the press really has a finger on the scale.

Monday, January 23, 2017.  Chaos and violence continue, eastern Mosul -- turns out -- not fully liberated as claimed last week, thug Nouri al-Maliki continues to cast a shadow over Iraq, what were US State Dept employees doing in the streets of Erbil on Saturday, and much more.


Why do they lie?

Maybe to excuse away their actions and ignore their guilt.

Yet again the corporate media is pimping the lie that Iraq came together to defeat the Islamic State.

Nor do people feel that their country came together.

The city seized by the Islamic State in June of 2014.

Early last week, the world was told eastern Mosul had been liberated.

Iraqi forces on Sunday retook two areas from the Islamic State group in Mosul, sealing their control of the east bank three months into an offensive to reclaim the city.


They recaptured "Al-Milayeen neighbourhood and Al-Binaa al-Jahiz area and raised the Iraqi flag over the buildings", the military said in a statement.


"These are the last neighbourhoods of the centre of the city (on) the left bank," the statement said, referring to eastern Mosul.

They did that yesterday?


Iraq's armed forces said Wednesday they are now in full control of eastern Mosul, a key development in a bloody fight with the Islamic State to win back the country's second-largest city.
Iraqi Army Lt. Gen. Talib Shaghati, who commands the counterterrorism forces, said the achievement was a “big victory,” describing the success of the Iraqi forces as “unprecedented,” the Associated Press reported.


So that wasn't true?

The eastern neighborhood of Rashidiyah still remains under control of the Islamic State.

98 days after Hayder al-Abadi launched the mission to liberate the city of Mosul, the offensive continues.

So Trump's anti-ISIS strategy is that the US should "keep" Iraqi oil! Who thinks THAT's going to work? bit.ly/2jcHmpq 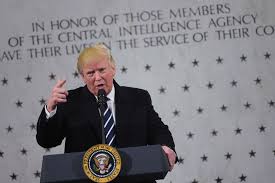 
Kenneth Roth rediscovers Iraq not over the execution of 31 people today.

He's not concerned about that.

Iraq has maintained one of the highest execution rates each year since the US-led invasion kicked off the Iraq War in 2003.

But that's no concern to Kenny Roth.

He's alarmed by a throw away remark by Donald.

Are we still not smart enough to turn down the constant outrage over Donald's throw away lines or his Tweets?

Waiting to object to something he actually proposes is just too much.

Got to feed that outrage machine.

And Tweeting about what Trump said is so much easier than dealing with the realities of Iraq.

Kenneth Roth has become a huge waste.  And if the coven in upper New York has their way, he will waste away this year.  Judging by the photos of him at Davos, those women may have done a successful cast.

I'm so proud of Kenny and the gang of whores who make up HRW these days.

I love the Tweet about who should and should not head the CIA based on whether or not they support mass surveillance.

You mean the mass surveillance that Barack carried out for two full terms without HRW ever condemning him for it?


#ThankYouObama for killing all those children in Libya, Syria, Somalia, Pakistan, Iraq, Afghanistan, Gaza, Yemen, and bailing out the banks


Where were you when it mattered?

That's right, no where to be found.

You acted as those the killing was normal, when you bothered to register it.

Just like you pretend nothing happened in Erbil this weekend.

For those who don't know, a number of US State Dept employees took to the streets of Erbil to protest US President Donald Trump.

People ought to be terminated for that.

There are rules when you work for the government.

They are paid by the US tax payer and they are limited in what they can and cannot do as government employees.

But they ignored that and they didn't care about the message they were sending, US government employees protesting the US President on foreign soil.

There's no excuse for their actions.

Nor is there any excuse for the US press not covering what took place or how offensive it was.

But if they'd told the truth during Nouri al-Maliki's second term (or the truth about how he got that term), the Islamic State would never have taken hold in Iraq.

Kurdistan Region’s President Masud Barzani threatened on Monday to declare the independence of the autonomous region from Iraq if Iraqi Vice President Nouri al-Maliki returns to the leadership of the government.
“The moment Maliki assumes cabinet chairmanship, I will declare the independence of Kurdistan without consulting anybody. No matter what happens. I am not staying in an Iraq ruled by al-Maliki,” he was quoted as telling Asharq al-Awsat newspaper on the sidelines of the World Economic Forum in Davos.

#StopArmingTerrorists isn’t a partisan idea, it’s common sense.  Let’s do this together. Join me → stoparmingterrorists.com


Had the US government possessed that common sense with regards to Iraq, there would have been arming Iraq in the last eight years.