Hillary and her band of thieves

From earlier this week, this is Isaiah's THE WORLD TODAY JUST NUTS "Hillary and the FBI" and  "Hillary Talks To Bernie." 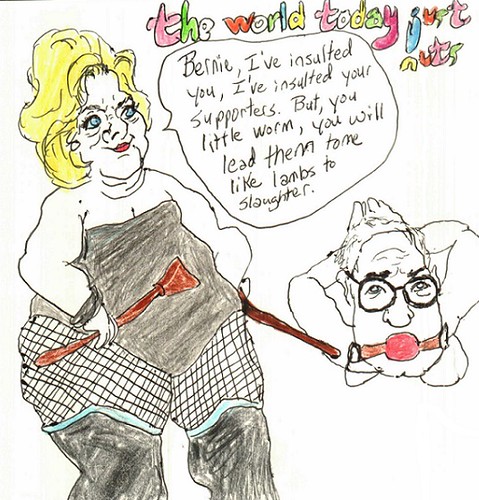 Hillary Clinton abuses Bernie supporters and Bernie Sanders himself -- I have no idea why any would vote for her.


H.A. Goodman is a columnist I have highlighted a great deal this year.  This is from his latest:


With the FBI beginning a second criminal investigation into Hillary Clinton’s handling of classified intelligence, it’s important to address the revelations within the following WikiLeaks email. WikiLeaks Email 31077 is even more important than the 650,000 emails found on Anthony Weiner and Huma Abedin’s computers. The Wall Street Journal reports thousands of messages found on their laptop originated from Clinton’s private server, which is why the FBI decided upon yet another Clinton email probe before Election Day. However, one of the biggest questions pertaining to Comey’s first attempt at investigating Clinton has yet to be answered: Why were Cheryl Mills and Hillary Clinton granted attorney-client privilege?

Before explaining why this WikiLeaks email destroys the rationale for Clinton’s bizarre legal arrangement, let’s address why the FBI allowed the subject of a criminal investigation to evade questions. According to a Law Newz piece by Chris White, Cheryl Mills claimed she learned about Clinton’s server only after defending Clinton during the legal struggle:


However, Mills could not claim attorney-client privilege covered information she learned during her time as Clinton’s Chief of Staff.  So, as Shannen Coffin, a former DOJ attorney, recently explained in an article at the Weekly Standard, “To fix that problem, Mills conveniently claimed that she did not know anything about Clinton’s email setup during her tenure at the State Department and only learned of relevant facts in her later capacity as Mrs. Clinton’s personal lawyer.”
For example, during the FOIA deposition, Mills was asked a question about why Clinton started using the clintonemail.com system.  Her attorney objected to question, saying that was also covered by attorney-client privilege.
“[Mills] — she learned this — refreshed her recollection — when she was acting as the Secretary’s lawyer, producing documents to the State Department,” Wilkinson said.

However, Cheryl Mills didn’t “product documents to the State Department” until after March 18, 2015.
Nobody knew the existence of classified intelligence on Clinton’s server until July 24, 2015.

Hillary Clinton is so crooked and so are the band of thieves that make up her campaign.

Cheryl Mills is the next Huma -- the next anchor around Hillary Clinton's neck.

How she plans to get out of it, I just do not know. 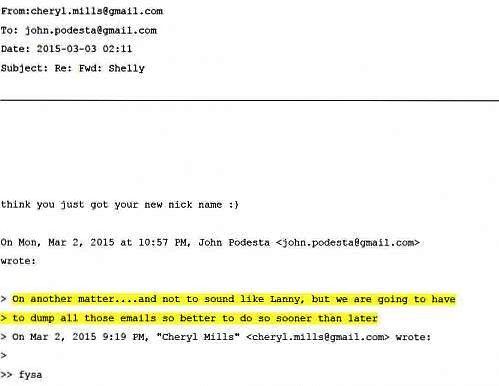 Linda Suhler, Ph.D. @LindaSuhler
Podesta To Mills: "We Are Going To Have To Dump All Those Emails" #PodestaEmails25 #Crooked #DrainTheSwamp http://www.zerohedge.com/news/2016-11-01/podesta-mills-we-are-going-have-dump-all-those-emails …
1 reply114 retweets94 likes


Tuesday, November 1, 2016.  Chaos and violence continue, the 'liberation' of Mosul is still completed, Hillary attacks the FBI, her hypocrisy remains uncommented on by the corporate media, and much more.


Starting with the disaster that is the lousy presidential candidate Hillary Clinton.  America's War Hawk in a pant suit is back under criminal investigation by the FBI.


On Saturday, our Lady of Eternal Hypocrisy publicly declared that "voters deserve to get full and complete facts"

Hillary's hoping there's a fool born every minute and that then they're immediately mass cloned.

Voters deserve to get full and complete facts?

Are the Podesta e-mails published by WikiLeaks true?

Hillary will blame Russia and distract.

Where's the concern, you hypocritical piece of trash, for "full and complete facts" there?

And why hasn't the press made an issue of it?

"Voters deserve to get full and complete facts," huffed liar Hillary on Saturday.

But she didn't care about full and complete facts when it came to the Democratic Party's primary being fixed and when Debbie Washerwoman Schultz got exposed for her part in fixing the elections, she had to step down.

Forced to resign as the DNC was on the eve of it's national convention.

But no need to fret for disgraced Debbie because Hillary doesn't have a campaign, she has a mafia.

But here's what she said July 24th:


“I want to thank my longtime friend Debbie Wasserman Schultz for her leadership of the Democratic National Committee over the past five years. I am grateful to Debbie for getting the Democratic Party to this year’s historic convention in Philadelphia, and I know that this week’s events will be a success thanks to her hard work and leadership. There’s simply no one better at taking the fight to the Republicans than Debbie–which is why I am glad that she has agreed to serve as honorary chair of my campaign’s 50-state program to gain ground and elect Democrats in every part of the country, and will continue to serve as a surrogate for my campaign nationally, in Florida, and in other key states. I look forward to campaigning with Debbie in Florida and helping her in her re-election bid–because as President, I will need fighters like Debbie in Congress who are ready on day one to get to work for the American people.”

Debbie resigns as chair of the Democratic National Committee and Hillary not only gives her a new positions ("honorary chair") but she issues a statement praising her.

And who replaced Debbie Washerwoman?

Donna was with CNN prior to replacing Debbie.  Donna was supposed to be an unbiased commentator.  But, it turns out, Donna used her CNN access to hurt the campaign of Senator Bernie Sanders and help the campaign of War Hawk Hillary.  Jeffry Bartash (MARKETWATCH) reports on how CNN is no longer in business with Donna:

Leaked emails by WikiLeaks from an account of Clinton campaign manager John Podesta suggested Brazile shared questions with the Clinton campaign before a CNN-sponsored Democratic debate and a voter town hall, when she was beating back a determined Democratic primary challenge from Vermont Sen. Bernie Sanders.
The release was an embarrassment to CNN and gave fuel to complaints by Republican Donald Trump, Clinton’s presidential rival, that the press was biased against him.
CNN, for its part, said an internal review determined that the news network was not responsible for providing Brazile any material to pass on to the Clinton campaign.
“CNN never gave Brazile access to any questions, prep material, attendee list, background information or meetings in advance of a town hall or debate,” the network said in a statement.

Still, CNN expressed disappointment with how Brazile acted while under contract to the network. “We are completely uncomfortable with what we have learned about her interactions with the Clinton campaign while she was a CNN contributor,” the statement said.

Poor Donna, she hasn't been this publicly humiliated since Michael Dukakis fired her from his presidential campaign in 1988.

"Voters deserve to get full and complete facts," snarled Hillary.

So how come she hasn't commented on Donna Brazile feeding her campaign questions?

She's incapable of being honest.

That's what's killed her every time.

Her hideous health proposal of the 90s died not because it was awful (it was awful) but because she did it behind closed doors and refused to be forthcoming.

Hillary doesn't understand that a politician -- even a president -- is a public servant.

Hillary refuses to operate in sunlight preferring to hide in the shadows.

That's why she's struggled with voters all along.


That's why she continues to struggle.

She is fundamentally dishonest and she is evasive at her core.

She is Richard Nixon.


And what continues in Iraq is war, though many work over time to pretty it up.  Bill Van Auken (WSWS) points out:


While the Russians are indicted for turning Aleppo into a “kill zone,” the Western media routinely refers to the American onslaught as the “liberation” of Mosul. To that end, US warplanes, rocket launchers and heavy artillery are relentlessly pounding the city of over a million, which analysts acknowledge will be reduced to rubble. The head of the US military’s Central Command, Gen. Joseph Votel, boasted in an interview with AFP that his forces had killed “800 to 900 Islamic State fighters.” He said not a word as to how many civilians had died under the US bombardment; nor has the US corporate media shown any interest in that subject.
When one horrific incident did come to light—the bombing of a Shia mosque near Kirkuk last Friday in which 17 women and children lost their lives and scores were wounded—the Pentagon brushed it aside and the media largely ignored it.


And that's why the put a brief halt on operations.


Funny how one press report after another failed to mention that.

These bombings continue.  Yesterday, the US Defense Dept announced:


Strikes in Iraq
Attack, bomber, fighter and remotely piloted aircraft and rocket artillery conducted nine strikes in Iraq, coordinated with and in support of the Iraqi government: 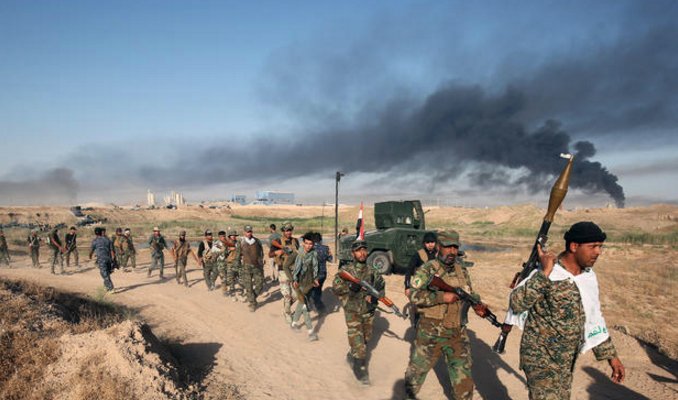 Hassan Ridha ‏@sayed_ridha  2h2 hours ago
2+ years after city fell under IS control & 16 days since launch of offensive; the Iraqi Army has reentered Mosul

Loveday MorrisVerified account ‏@LovedayM  2h2 hours ago
As Iraqi special forces push into Gogjali in the outskirts of #Mosul, #ISIS opens fire behind their lines at Bazwaya, a few miles back
0 replies20 retweets10 likes

Not a great deal of interest in civilians from the corporate media -- not even when reporting on the supposed 'liberation' of civilians.

Iraqi government troops entered the eastern outskirts of Mosul Monday, as the US-backed offensive launched October 17 to recapture the country’s second largest city from the Islamic State began its third week.
But the advances of Iraqi government soldiers, Peshmerga fighters and Sunni and Shia militias could not conceal the fact that growing sectarian tensions are threatening to vastly intensify the bloody conflict in Iraq and Syria and draw the major powers into a direct military clash.
Counter-Terrorism Service (CTS) special forces captured Bazwaya, the last village outside of Mosul, in a dawn raid Monday. Although there were no reports of civilian casualties, the Associated Press noted burning houses and buildings with collapsed roofs in the village, where hundreds of families are believed to be.

Later, it was confirmed that Iraqi troops had entered the Karama neighborhood in Mosul’s east. Another section of the Iraqi army advancing on Mosul from the south remains approximately 10 miles away.