The former Secretary of State is said to have even more scandals ready for a general election with this round surrounding the infamous Clinton Foundation.

Recent news reports indicate that the FBI is investigating former Secretary of State Hillary Clinton for granting favors to her family’s foundation donors and for its systematic accounting fraud. In January, the Sunday Times of London cited former Judge Andrew Napolitano, a conservative libertarian and frequent Fox News guest, as saying that the FBI was taking evidence “seriously” and that Hillary “could hear about that soon from the Department of Justice.”
[. . .]
To take one of so many examples, there’s the case of Clinton Foundation donor Claudio Osorio—who is now housed at a federal prison serving 12 years for fraud—who in 2010, with Ms. Clinton’s (and Bill Clinton’s) help, won a $10 million loan from the Overseas Private Investment Corporation.
The loan was granted to an Osorio firm called InnoVida, which was supposed to build houses in earthquake-ravaged Haiti. Instead, Osorio pocketed the money and used it to underwrite his lavish lifestyle and to pay off politicians. For political muscle, Osorio—who also had close ties to Jeb Bush, who sat on the board of a bank he owned—paid a lobbyist and major Hillary fundraiser named Jonathan Mantz.


The big question has to be: Why isn't this woman in jail already?

Thursday, the US Defense Dept announced/claimed:


Strikes in Iraq
Attack, fighter and remotely piloted aircraft and rocket artillery conducted 26 strikes in Iraq, coordinated with and in support of Iraq’s government:

-- Near Kirkuk, a strike struck a large ISIL tactical unit and destroyed two ISIL vehicles, an ISIL command and control node and an ISIL weapons cache.

-- Near Kisik, a strike destroyed an ISIL tunnel.

-- Near Ramadi, a strike denied ISIL access to terrain.


In other news, a supposed major move is taking place on the ground. 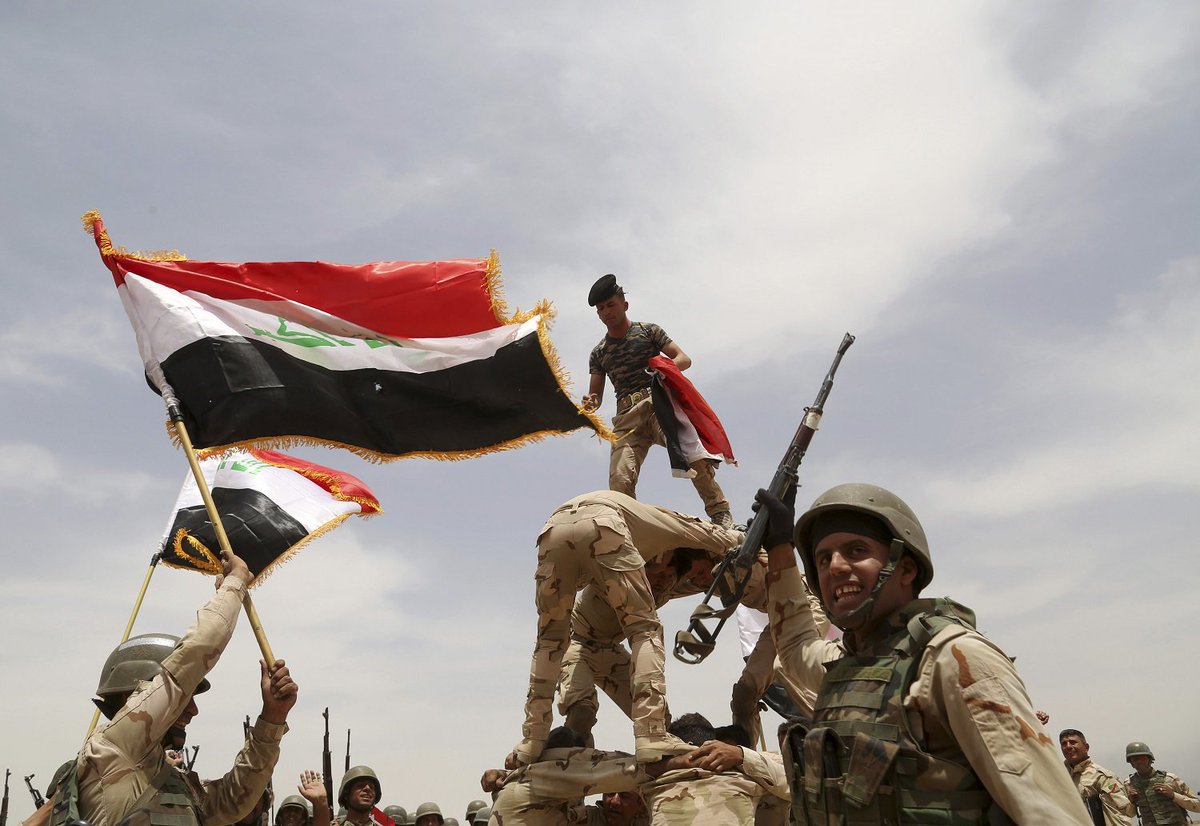 
Larisa Epatko (THE NEWSHOUR) explains, "About 2 million people lived in Iraq’s second largest city before the Islamic State, or ISIL, siege in June 2014. Since then, some residents, including Yazidis, Turkmen and other ethnic and religious minorities have fled to other parts of the country."
The ASSOCIATED PRESS notes, "It was not immediately clear how long such a complex and taxing offensive would take."


While Iran's PRESS TV is rah-rah, others are a bit more down to earth.  For example, CBS NEWS offers:


Indeed, a senior U.S. military official told CBS News that Thursday's advance was a "small operation to liberate some villages near Makhmour and push the foreign line of troops west." A commander of the Kurdish Peshmerga forces characterized the operation in the same way.

Still, the Iraqi ground operations are preliminary and Iraqi forces are still about 75 miles away from Mosul.
Iraq's military has yet to assemble enough trained forces needed to seize the city, a complex operation that will exceed anything Iraqi forces have accomplished since the country's military collapsed in the face of an Islamic State onslaught two years ago.


Jason Ditz (ANTIWAR.COM) sees something more than liberating Mosul as the point of the current operation focusing on Makhmour:

The Makhmur District is also a key to holding oil fields around Kirkuk, and the ISIS offensive is seen by many analysts as part of an effort to ultimately regain control over those lucrative oil fields, and have been “outgunning” the thousands of Iraqi troops in the area.
Whether they’re trying to save Iraqi ground troops who still can’t stand up to ISIS, or save oil fields, however, the latest escalation puts US troops even further in harm’s way, and has put the war even further afield from the “no boots on the ground” affair initially promised by the Obama Administration.


The "no boots on the ground" promise is now forgotten.

As pointed out on DEMOCRACY NOW!:

The Pentagon is facing increasing questions about the U.S. troop presence in Iraq, following the death of Staff Sgt. Louis Cardin and the revelations of a newly disclosed U.S. base in northern Iraq. Unnamed Pentagon officials told The Washington Post that there are currently about 5,000 U.S. soldiers in Iraq—a far higher number than previously reported. The U.S. troop level in Iraq is supposed to be officially capped at 3,870. But U.S. military spokesperson Colonel Steve Warren said, "People come through on a temporary basis and go above and below the force cap all the time."

On Thursday's THE NEWSHOUR (PBS), Judy Woodruff spoke with Senator Bernie Sanders about the Islamic State:


SEN. BERNIE SANDERS (VT-I), Democratic Presidential Candidate: Well, I think it has to be destroyed.
This is a barbaric organization that is a threat not only to the people in the Middle East, to the people in Europe, but obviously to the people in the United States as well. It has to be destroyed.
And here is how we destroy it. We do not destroy it by doing what we did in Iraq and getting into perpetual warfare. I voted against the war in Iraq. In fact, Secretary Clinton, when she was in the Senate, voted for that war.
What we do, as King Abdullah of Jordan has told us, is we work to put together a very effective coalition of Muslim nations who lead the effort on the ground, supported by the United States, the U.K., France, and other major powers in the air and through training.
Now, in the last year, we have had some success. Ramadi has been recaptured. ISIS has lost about 20 percent of the ground that it controlled. But we have a lot more to do. So, I think what we need is strong coalition.
And, by the way, Judy — and very few people talk about this — we have got to bring in some of the Gulf region countries who have kind of sat it out, countries like Qatar, one of the wealthiest countries on earth, who are spending $200 billion in preparation for the World Cups in 2022.
They’re spending $200 billion for the World Cup. Well, they may want to spend some money helping us destroy ISIS. Saudi Arabia, the UAE, Kuwait are going to have to play a greater role.


JUDY WOODRUFF: But, Senator, as the United States waits for these other countries to get on board to form this coalition, ISIS is not only strong in its base in Iraq and Syria. It’s now sending, we know, hundreds of fighters into Europe, the AP reporting today 400 trained fighters planing attacks in Europe.
That’s going on right now.


SEN. BERNIE SANDERS: Right, and that raises the other issue.
First of all, we have got to destroy ISIS. Second of all, we have got to protect the United States from attacks and protect our allies throughout the world. And that means we need to do a much greater job in sharing intelligence. We need to do a much better job in monitoring those young people who are being drawn into terrorism.
We have got to monitor how they communicate with each other to plan attacks. So, there is a lot of work to be done to protect our country, as well as to protect our allies in Europe and elsewhere, by the way.


JUDY WOODRUFF: But how do you do that, when there are people right now in Europe, in Belgium, and other countries and presumably here in the United States who are prepared to die for this cause?


JUDY WOODRUFF: But I don’t understand how you destroy ISIS, to use your word, when you’re talking about intelligence operations and cooperation and coalitions.


SEN. BERNIE SANDERS: You don’t understand how we destroy ISIS?
We destroy ISIS because there are millions of soldiers in the Middle East who are under arms right now. ISIS has perhaps 30,000 or 40,000 fighters. Our goal is to bring those countries together, to put troops on the ground to destroy ISIS, not to get the United States involved in perpetual warfare.

Can ISIS be destroyed? Of course they can. It’s a question of a coalition. It’s a question, as King Abdullah has said, Muslim troops on the ground, not American troops. And, by the way, it is not a question of going to war against a religion, as some of my Republican colleagues would have us do. We’re taking on terrorism and ISIS, not Islam as a religion.

And Bernie just keeps picking up endorsements -- including this major endorsement:

SAN FRANCISCO, CA – The ILWU’s International Executive Board voted today to endorse U.S. Senator Bernie Sanders for President.
“Bernie Sanders is the best candidate for America’s working families,” said ILWU International President Robert McEllrath. “Bernie is best on the issues that matter most to American workers:  better trade agreements, support for unions, fair wages, tuition for students and public colleges, Medicare for all, fighting a corrupt campaign finance system and confronting the power of Wall Street that’s making life harder for most Americans.”
Many longshore union members have expressed enthusiastic support for Sanders at the local level.
The ILWU represents approximately 50,000 women and men who work in California, Oregon, Washington, Alaska and Hawaii – in addition to ILWU Divisions representing workers in Canada and Panama.

antiwar.com
jason ditz
Posted by Ruth at 10:30 AM