Does he ever stop lying?

President Barack Obama went to Baltimore today to campaign and, apparently, to lie:

"We signed two trillion dollars in spending cuts into law," Obama said. "Spending under my administration has grown more slowly than under any president in 60 years."
The Washington Post's Glenn Kessler previously gave this federal spending claim "Three Pinocchios."  That is really a kind way of saying, "Liar! Liar! Pants on fire."  Democratic Underground has the AP story where they also find the claim "way off."

So why is he repeating the lie?

I am not following the campaigns at all.  But even I knew this was false.  Does he not realize that a lot of people know his remarks were false?

Does he not care that he is lying?


I guess Isaiah was right back in July 2010 when he drew this: 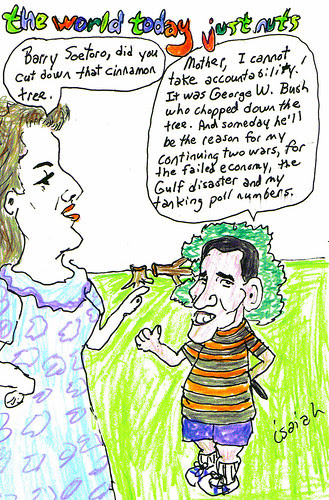 He is the anti-George Washington.


Tuesday, June 12, 2012.  Chaos and violence continue, Gina Chon and the Wall St. Journal part ways, Iraq and Iran grow further entwined, is Brett McGurk the reason the alleged killer of 5 US soldiers will likely walk, Cindy Sheehan talks about how the peace movement got hijacked by Democratic Party operatives, and more.
It's official: The Barack Obama administration is now the least accountable administration in modern history.  How did it earn that dishonor?
When Rupert Murdoch's Wall St. Journal shows stronger ethics than your administration, there is a problem.  When Wall St. Journal reporter Gina Chon and married Bush administration figure Brett McGurk decided to get hot and heavy in Baghdad in 2008, each was violating written policies of their employers.  At present McGurk is still attempting to become US Ambassador to Iraq.  Gina Chon, however, has parted with employer today.
Howard Kurtz (Daily Beast) reports, "Wall Street Journal reporter Gina Chon resigned on Tuesday over her relationship with a U.S. official who is now President Obama's nominee to be ambassador to Iraq." Lisa Dru (Business Insider) reports on the news as well and includes the Wall St. Journal's statement:
Wall Street Journal reporter Gina Chon agreed to resign this afternoon after acknowledging that while based in Iraq she violated the Dow Jones Code of Conduct by sharing certain unpublished news articles with Brett McGurk, then a member of the U.S. National Security Council in Iraq.
In 2008 Ms. Chon entered into a personal relationship with Mr. McGurk, which she failed to disclose to her editor. At this time the Journal has found no evidence that her coverage was tainted by her relationship with Mr. McGurk.
Ms. Chon joined the Journal in 2005 in Detroit, followed by an assignment as Iraq correspondent in Baghdad from 2007 to 2009. She also reported for the Journal from Haiti in 2010 in the aftermath of the earthquake and has served as a M&A reporter for Money & Investing in New York since April 2010.

Whitney Lloyd, Jake Tapper and Dana Hughes (ABC News) explain, "The emails, first published by the blog Cryptome last week and confirmed by ABC News, are sexually explicit and suggest that Chon got much of her information, guidance and access for her reporting from McGurk during their affair."  Joe Coscarelli (New York magazine) quotes Senator James Risch on McGurk's nomination,  "Prior to these e-mail revelations, I had reservations about confirming Brett McGurk as ambassador to Iraq. Now that additional issues have been raised, more information will be needed and I reserve final judgment until all the facts are brought to light."  Adam Martin (The Atlantic) observes, "In the end, it wasn't the sex with a source but the admission she shared unpublished stories with him that caused Wall Street Journal reporter Gina Chon to resign from the paper."  Like Howard Kurtz, Meenal Vamburkar (Mediaite) is reporting that Chon took her leave of absence from the paper after the e-mails were published.
As usual The Huffington Post does a lousy job covering this story (while Poynter and CJR ignore it outright) as demonstrated by the comments where stupidity is flaunted with comments like "They got married!" or that they only had an affair.  You don't sleep with your source.  And, yes, HuffPo should do a better job covering the issues involved; however, most grown ups should already know that sleeping with your source -- especially someone working for the government -- is a huge conflict of interest.  Not an apparent one.  A conflict of interest.
That's what Lisa Du was explaining yesterday, "Aside from the fact that Chon probably committed the biggest no-no in the journalism industry by sleeping with her source, McGurk, by the way, was apparently still married when he and Chon had their rendezvous in the summer of 2008, the Washington Free Beacon is reporting."  And McGurk also had a written code of conduct.  We knew McGurk was hiding the affair from his bosses (and he was hiding it because it was a violation of the written rules of conduct he signed and agreed to follow).  And it's the point Erik Wemple (Washington Post) makes today, "Not alerting an editor to a relationship with a ranking official in the center of her beat is a job-ending breakdown. Though a grace period must apply to the initial stages of courtship, Chon had progressed beyond that point, as the e-mails make clear. Let's just say that if you're discussing masturbation with a high-ranking lover/source, you have some news for your editor. The statement from the Wall Street Journal states that Chon neglected to take that step."
And more troubles keep coming Brett McGurk's way.  Josh Rogin (Foreign Policy) reports on Senator Mark Kirk, "One Republican senator [Kirk] is now making an issue out of McGurk's role in the case of Ali Musa Daqduq, the alleged Hezbollah commander who was transferred from U.S. to Iraqi custody last December and acquitted in an Iraqi court last month. He remains in Iraqi custody pending an automatically triggered appeal, but could be released thereafter. "
Who?
In May, Mike Jaccarino (Fox News -- link is text and video) quoted Charlotte Freeman stating, "It was like a pit (opening) inside of me. I briefly read it and couldn't read on.  I couldn't go there.  It wasn't like he was dying again.  It was more shock that these people get away with what they do.  There's no justice. It's amazing and shocking to me that someone who did what he did could go free."  That was her reaction to the news that Iraq planned to set freem the man who allegedly killed her husband, 31-year-old Spc Brian S. Freemen as well as 22-year-old Spc Johnathan B. Chism, 20-year-old Pfc Jonathon M. Millican, 25-year-old Pfc Shawn P. Falter and 25-year-old 1st Lt Jacob N. Fritz.  The 5 US soldiers were murdered in January 2007.  The US military had Ali Musa Daqduq in custody along with others who were said to have orchestrated the killings.  But they let go of the League of Righteous members in the summer of 2009 to help out England (5 Brits had been kidnapped -- only one would be returned alive after the League was released).  They kep Daqduq in US military custody.  What happened?
December 16, 2011, Liz Sly and Peter Finn (Washington Post) reported on the US handing Ali Musa Daqduq over to the Iraqis, "He was transferred to Iraqi custody after the Obama administration 'sought and received assurances that he will be tried for his crimes,' according to Tommy Vietor, spokesman for the National Security Council in Washington."  Though US Senators objected to his being handed over to Nouri's legal system, the White House insisted he would be prosecuted and, if for nothing else, he might do eight years for entering Iraq illegally!
5 deaths.  Brutal deaths.  This was an attack that involved kidnapping.  And Barack was fine with  Ali Musa Daqduq just getting a slap on the wrist for entering Iraq without the proper travel visa.  Then on May 7th, Suadad-al Salhy, Patrick Markey and Andrew Heavens (Reuters) reported that Iraq's 'justice' system has cleared Ali Mussa Daqduq of all charges related to the "2007 kidnapping attack that killed five U.S. troops."  This is currently on appeal but it's not exepcted to be any trouble for Ali Mussa Daqduq to walk on all charges.   Kitabat reported  in May that Nouri caved to pressure from Tehran and that's why he was released.   It was also noted that a number of US Senators were asking the White House not to turn Daqduq over to Iraq but to move him to Guantanamo or another facility.
Was Brett McGurk involved in those decisions?  He was in Iraq as the decision was being made and as we quoted him in last Wednesday's snapshot telling the Senate Foreign Relations Committee:

With the war there officially "ended" and most of our troops back home, Iraq isn't getting much ink these days. But the story is far from over. Indeed, according to Wadah Khanfar, former director general of Al Jazeera, Iraq is still the most important story in the Middle East -- with a far greater impact on the region's future than Syria. "Nobody's paying attention to Iraq anymore," he told me during dinner in London over the weekend, "but it's becoming a client state of Iran, with a giant amount of oil between them." This state of affairs is, of course, primarily our doing.
And yet, as our soldiers have left, so has our attention. "The war in Iraq will soon belong to history," proclaimed President Obama at Fort Bragg as he marked the occasion of bringing the last troops home. But while the military chapter of that disastrous undertaking might belong to history, its consequences belong very much to the present. A present in which the very same voices that rose to push us into war with Iraq are again rising to push us into war with Iran -- but without ever noting that it was their misadventure in Iraq that gave Iran a new and powerful ally.
As noted yesterday, Iran and Iraq are now planning for ways for Iraq to secure leadership of OPEC -- that would be the post of Secretary General.   Peg Mackey (Reuters) notes the two countries stand at odds with Kuwait, Saudi Arabia and the United Arab Emirates and that Iraq and Iran's desire to make more than $110 per barrel of oil is going to lead the two to demand "Saudi Arabia, pumping its highest in decades, [. . .] cut back when producers meet in Vienna on Thursday."  Mackey explains that Iraq worked out its strategy "when Iran's Oil Minister Rostam Qasemi visited Maliki in Baghdad last week, Maleki ordered the oil ministry to adopt a unified position with Iran on OPEC production levels, say Iraqi oil sources." Iraq and Iran, plotting together, like old friends.  Una Galani and Christopher Swann (Reuters) adds, "If Iraq's rising output isn't calibrated with the market's ability to absorb it, oversupply could become chronic and prices could fall further."
In the latest violence, Alsumaria notes 4 assailants shot up the Basra home of provincial council member Mohammed Saadoun al-Abadi last night and 2 people were shot dead while walking in southern Baghdad.  Sinan Salah (AP) reports that a Baghdad bombing has left 2 pilgrims dead who were taking part in "the annual pilgrimage honoring a revered imam."
In the US, Senator Patty Murray is the Chair of the Senate Veterans Affairs Committee which holds a hearing tomorrow.  Her office notes:
FOR PLANNING PURPOSES
Tuesday, June 12, 2012
CONTACT: Murray Press Office
(202) 224-2834
Murray to Question Defense Secretary on Military-Wide Mental Health Care Shortcomings
As military suicides continue to outpace combat deaths, Murray to urge Pentagon to expand ongoing Army-wide review of behavioral health evaluations and diagnoses to all branches, call for transparency in review process