Kat's "Kat's Korner: Middle-Aged Men, not boys" went up yesterday as did Isaiah's The World Today Just Nuts "The Failed Match Up." 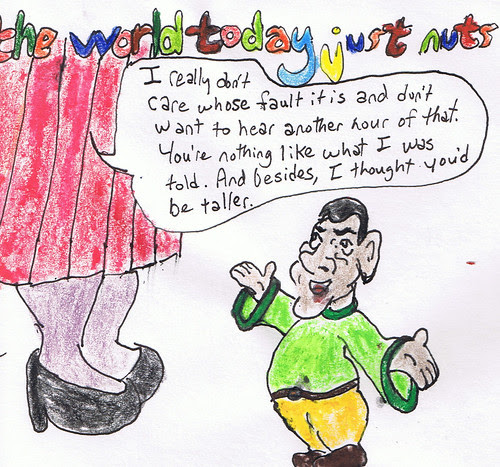 Bad news for the administration via Reid Epstein's POLITICO report:

Six in 10 Americans think the economy is still getting worse and 75 percent believe the nation is doing badly, according to a CNN poll released Monday.

The poll, conducted this weekend after ratings agency Standard & Poor’s downgraded the nation’s AAA credit rating for the first time in its history, marked a 24 percentage point increase since April of people who believe the economy is in a downturn, CNN said.

If the elections were today, he would be a one-term president.

Too bad we have to wait another year.

I hope people do not forget what we have been through. I hope they hold him accountable.

No one can claim otherwise.

When you vote for president, you are not voting for home coming king. He was clearly not qualified and now look where we are.

Article 17 of the ICCPR mandates the right of privacy. This provision, specifically Article 17(1), protects private adult consensual sexual activity, including homosexual behaviour.
In 1994 the Human Rights Committee considered the case of Toonan v Australia. The committee concluded that the criminalisation of sexual acts between consenting adults was a breach of a right to privacy and that the right to be free from
discrimination on grounds of sex included sexual orientation. Since then, the committee has developed and consolidated its own jurisprudence. During the Universal Periodic Review at the Human Rights Council in Geneva in February 2010, Iraq expressly and officially rejected calls by UN member States to act to protect persons on account of their sexual preferences, and to investigate homophobic hate crimes and to bring perpetrators of such crimes to justice.
UNAMI continued to receive reports during 2010 of attacks against individuals based on their perceived or actual sexual orientation. The topic of homosexuality is largely taboo in Iraq and seen as incompatible with the country's culture and religion.
Members of the Lesbian, Gay, Bisexual and Transgender (LGBT) community usually keep their sexual orientation secret and live in constant fear of discrimination, rejection by family members, social ostracism, and violence. The Iraqi Penal Code does not expressly prohibit homosexual relations between consenting adults. However, a variety of less specific, flexible provisions in the Iraqi Penal Code leave room for active discrimination and prosecution of LGBT persons and feeds societal intolerance. Police and courts regularly take into account the alleged homosexuality of the victim as a mitigating factor in relation to crimes committed against persons on account of their perceived or real sexual orientation.
Reports published by Ali Hilli, the pseudonym of the sole publicly known representative of the Londonbased Iraqi LGBT, state that on 16 June, 12 police officers burst into a "safe house" in Karbala' and violently beat up and blindfolded the six occupants before taking them away in three vans. The same report states that the police confiscated computer equipment found in the house before burning it down. The six people arrested reportedly included three men, one woman and two transgender people. Two days later, one of the men turned up in hospital with a throat wound claiming he had been tortured. UNAMI has not been able to ascertain the whereabouts of the other five individuals.
UNAMI continued to follow the cases of ten men who were persecuted in Baghdad because of their perceived or actual sexual orientation. As previously reported, the men had suffered extreme forms of violence and abuse at the hands of members of the Mahdi Army, police officers, religious leaders and local criminal gangs, which had forced them to flee to a neighbouring country in May 2009 from where they hoped to seek protection in third countries. While one of these cases was subsequently resettled through UNHCR, some of these men subsequently returned to Iraq because they claimed they lacked funds and adequate means of support. One of them contacted UNAMI stating that he was homeless and alleging that he was being subjected to further acts of violence. He reported that he could not return to his family who had threatened to kill him because of his sexual orientation.

WHAT: Senator Murray will speak at the Amazon headquarters in Seattle to highlight her Hiring Heroes Act of 2011, a bill that will require job skills training for

The US military now tracks suicides of those serving. Each month, the Army releases their data. And while this gives the appearance that something's being done to address the crisis, veterans suicides are not being tracked by the government (or that's the government's claim). Sharon Jayson (USA Today) reports the University of Utah's National Center for Veterans' Studies is presented findings Thursday at the American Psychological Association convention in DC. The National Center for Veterans' Studies will be highlighting a higher suicide attempt rate among college students with military service -- six times higher -- than students who had not. Brian Maffly (Salt Lake Tribune) adds, "In a new study led by the University of Utah's National Center for Veterans Studies (NCVS), researchers found that 46 percent of those responding to a survey reported some suicidal thinking, while 10 percent planned suicide and 7.7 percent attempted it. Eighty-two percent of those who attempted suicide experienced post-traumatic stress disorder, or PTSD." Wendy Rigby (San Antonio's KENS 5 -- link has video and text) reports on the issue andspeaks with Dr. Craig Bryan of the UT Health Science Center who states, "The initial reaction was just shock and we were quite alarmed actually. The transition for many is much more difficult than what we often assume it would be. It's just a very different lifestyle. It's a very different lifestyle and as we all know it's just stressful to make those types of changes in life in general."


(Washington, D.C.) -- U.S. Senator Patty Murray (D-WA), Chairman of the Senate Veterans' Affairs Committee, has joined with Senators Jay Rockefeller (D-WV), Max Baucus (D-MT), and Robert Casey (D-PA) to call on state Governors to begin reporting critical statistics on suicides among military veterans in their states. The effort, which comes amid a steadily rising suicide rate among veterans and members of the military, focuses on pushing 41 states to create a direct link to the VA to communicate information about veteran suicides. That information is particularly important for tracking and prevention efforts as many suicides among veterans not enrolled in the VA often go unrecorded.


"One of the most significant obstacles to understanding veteran suicide is the lack of information available regarding these individuals," the Senators wrote. "In many cases the Department of Veterans Affairs does not even know that a veteran has died if that individual was not enrolled in VA health care."


In addition to the National Governors Association the letter sent by the Senators also went to the National Association of Medical Examiners, which is the professional organization for medical examiners and death investigators who are responsible for investigating deaths that are violent, suspicious, or otherwise unusual.


The full text of the Senators' letter is below:


As you know, there has been a disturbing rise in suicide rates among veterans and members of the military. We are sure you find this trend as troubling as we do. As we continue our work to provide all the needed resources and services to assist servicemembers and veterans with mental health concerns, we ask for your assistance in this effort.


One of the most significant obstacles to understanding veteran suicide is the lack of information available regarding these individuals. In many cases the Department of Veterans Affairs does not even know that a veteran has died if that individual was not enrolled in VA health care. This makes it very difficult for researchers and mental health professionals to study the information and design effective, targeted campaigns to prevent suicide.


This is a result of the fact that only 16 states provide information to the Centers for Disease Control and Prevention's National Violent Death Reporting System. VA has also been working with the states to create a direct link between the states and VA to communicate information about veteran suicide, but so far only nine states have reached such an agreement with the Department.


We understand that many states have efforts underway to address this problem. It is important to ensure that these efforts are completed quickly. Further, with respect to the states which have not yet begun such efforts, we must encourage those governors to see that their states begin working with VA to reach an agreement and provide this information directly to the Department. As you know, these arrangements will be very beneficial as they will allow VA to utilize the timeliest data to improve the efficacy of suicide prevention efforts.


Thank you for your assistance, we look forward to working with you on behalf of the nation's veterans.